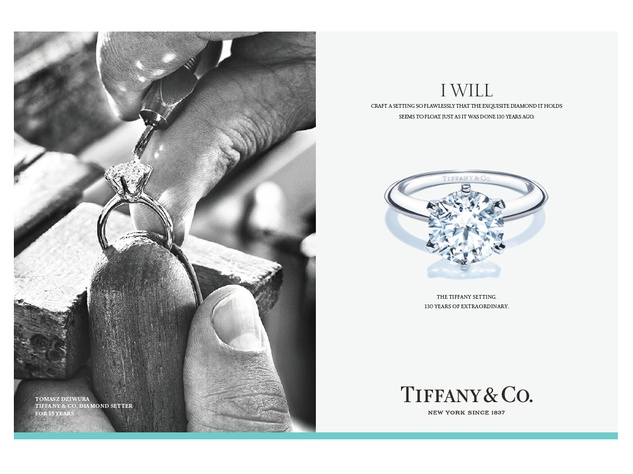 Luxury jewelry company Tiffany & Co. recently launched a new advertising campaign to celebrate the 130-year anniversary of its classic solitaire engagement "Tiffany" ring setting, and it's their signature setting that has led the company to become embroiled in a legal battle with warehouse store Costco.

To highlight the unparalleled quality of Tiffany engagement rings, the New York-based jeweler is shying away from traditional advertisements featuring dewey-eyed models. Instead the new ads show off the hard work of its top gemologist, as well as the specialists who set and polish the diamonds.

Fortune magazine surmises that the new craftsman-focused campaign is related to the lawsuit the company filed against Costco in 2013 for alleged trademark infringement and counterfeiting.

The lawsuit is based around a complaint received by Tiffany in December 2012 from a California woman who was disappointed to see Costco selling Tiffany diamond engagement rings. Upon further investigation, Tiffany found rings in a display case at the Huntington Beach Costco labeled with the word "Tiffany" and discovered that a salesperson at the store there referred to them as such.

Although Costco has argued that "Tiffany" is a generic term for a type of setting — the traditional Tiffany setting has six prongs — a U.S. District Court in Manhattan in September found that Costco knowingly infringed on Tiffany's intellectual property.

The court ultimately ruled that Costco would have to face a jury trial to assess damages for the trademark infringement and counterfeiting. The damages trial is set to start June 13, although there have been several delays.

Tiffany is also in the spotlight as the focus of a new documentary film, Crazy About Tiffany's, that examines how the company evolved from a simple jewelry store to a global phenomenon. Released in theaters and Video On Demand on February 19, the film features candid highlights of the brand's storied history, its unbeknownst impact on pop culture and unique insights from the likes of Jessica Biel, Katie Couric and Rachel Zoe.